As cases continue to rise, many states have started to slow in their case growth, but certain states like Georgia, California, and Texas have not yet seen the worst. A recent report leaked by the White House Task Force has advised Georgia to initiate a state-wide mask mandate. Following these recommendations, Republican governor Brain Kemp was scheduled to sign an executive order to mandate masks in public places but not private businesses. Many states have followed similar guidelines, but numbers have continuously shown that simply advising social distancing and mask-wearing is not working. California has become the first state in the nation to exceed 600,000 cases, and Texas and Florida are closing in on 10,000 deaths.

As these numbers grow, schools and universities continue to reopen. In Texas, health officials and teachers have strongly opposed the reopening of schools, but governments are pushing forward in their reopening plans. CDC director Robert Redfield talked to NBC news and said that schools should not be pressured by governments to open. Instead, every school must ensure proper protection measures are in place, especially in high risk and disadvantaged communities.

While these protection measures have been highly encouraged, they have rarely been mandated. In states like Oklahoma, the Board of Education has failed to implement mask mandates, allowing individual schools to decide what types and amounts of PPE are required for students to return to school. Teachers from around the country have expressed concern over the lack of mask-wearing and general safety precautions being taken in schools. However, many teachers speaking out against the lack of PPE and mask mandates in schools have been met with career repercussions. Critics of these teachers argue that PPE, especially face masks, are uncomfortable for children; many say that requiring PPE during an entire school day is impractical for young learners.

Mounting pressure from parents and teachers to mandate mask-wearing in the classroom has financial consequences on schools as well. A recent study concluded that the average cost for providing PPE in schools amounts to over $490 per person. These costs include masks, sanitation, stations, and more. These costs have deterred schools from providing PPE, lowering mask-wearing rates among students with little incentive to bring their own protective face coverings. These factors have pushed teachers to find creative ways to ensure their classrooms are safe. Many are making COVID-19 back-to-school kits or providing extra credit to students who wear masks.

While the PPE crisis has been widely broadcasted in this country for months, many have failed to recognize the problem inside the larger crisis: disparities between hospitals, as well as acute care hospitals versus smaller healthcare organizations such as nursing homes, home health aid groups, and community health centers. Per the decision of the federal government, hospitals and states have been left to enter bidding wars for PPE, rather than receive support from federal action. Over time, this has caused an emerging disparity between rich and poor healthcare facilities , with larger and richer hospitals easily able to outbid smaller facilities. This outbidding has been apparent in the race for personnel and personal protective equipment. While the government has continued to claim that shortages are being addressed, action is usually only beneficial to large hospitals. Nursing homes, small hospitals, and long term care centers are left forgotten. This became even more clear when the $175 million Congress allocated to help provide better access to PPE was targeted towards well-funded hospitals.

This Week at GetUsPPE

GetUsPPE’s data collection on current coronavirus hotspots was used in a recent article by Politico to discuss the PPE and staffing disparities emerging between hospitals. Trends at GetUsPPE that demonstrate a notable shift in PPE requests, from large hospitals to small providers, have shown the lack of a unified national response and the failure to identify areas most in need.

Dr. Esther Choo, a Co-Founder of GetUsPPE, contributed to the discussion regarding the growing concern over disparities in potential vaccine availability. Recent months have demonstrated a growing inequality in the proportion of black and brown communities affected by COVID-19. With 90% of predominantly black communities expected to be affected by this virus by the end of April 2021, many are questioning if the United States will fail to provide adequate access to a future vaccine to black and brown communities: communities that need it the most. Dr. Choo expanded on this in an interview with Bloomberg, discussing the difference between race and ethnicity deaths, and stressing the socioeconomic disparities hindering minority communities from receiving proper care for COVID-19.

Dr. Megan Ranney, a co-founder of GetUsPPE, was interviewed by MSNBC on the lack of a unified federal response during these times. She explained the importance of mask-wearing, but lamented that current federal responses were hindering the potential that mask mandates have in preventing future economic shutdowns. Dr. Ranney expressed her frustration that so many public health officials have lost jobs due to baseless claims and “anti-science sentiment” against their qualifications and ability to make educated decisions. 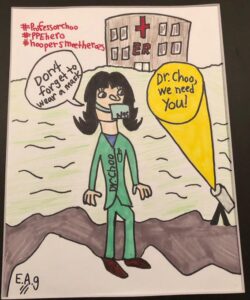 However, there continue to be heartwarming stories from individuals simply looking to make a difference. 8-year-old Ethan Goldsmith used his love for art and his personal connection to the PPE crisis to enact change the best way he knew how: through art. With his aunt fighting the coronavirus on the front lines, Ethan became aware of the PPE shortages healthcare workers were facing around the country. Using his love for art, he began selling drawings of healthcare heroes and donating the proceeds to GetUsPPE. With dozens of requests, he was able to donate hundreds, helping to contribute to the more than 2.5 million units of PPE that GetUsPPE has been able to deliver.