An update on the numbers: the United States now has more than 4.9 million confirmed COVID-19 cases and 160,000 total deaths. Numbers have continued to rise over the past week as the country struggled over mask mandates, PPE shortages, school reopenings, and more.

With constant reports of PPE shortages in healthcare facilities, the notion that masks and gowns make healthcare workers immune to the virus has become widespread. While previous studies showed that healthcare workers are 10-20% more likely to be infected with COVID-19 than the general population, few people paid attention to these statistics.

However, a new study by a leading medical journal, The Lancet, discovered that healthcare workers equipped with gloves, gowns, and face masks still have 3.4 times the risk of catching COVID-19 compared to the general population. Their reports showed that while every 240 out of 100,000 people within the general public exhibited symptoms of COVID-19, a staggering 2,700 out of 100,000 healthcare workers showed symptoms.

However, these studies should not discount the positive effects of PPE. For example, N-95 masks filter out 95% of aerosolized virus particles, keeping healthcare workers much safer than they would be without PPE. Similarly, gowns, gloves, and face shields have acted as critical barriers between the virus and healthcare workers.

For many, PPE shortages will go beyond just the next few months. With 13,000 requests still in the GetUsPPE database, the outreach team at GetUsPPE is still witnessing the effects of PPE shortages. Stories of healthcare workers wearing raincoats instead of gowns, socks instead of booties, and wearing the same N-95 mask for days at the time continue to underscore the need for PPE. The California Hospital Association has stated that shortages of masks and gowns, and supply chain slowdowns, are predicted to continue in many Californian hospitals for the next two years.

Furthermore, the past few months have shown a shift in need, as non-hospital facilities such as nursing homes and jails prove to be hit hardest by inadequate supply chain management. Recently, prison healthcare unions have demanded for states to provide better testing and greater access to PPE. Outbreaks in prisons have become widespread and deadly, as masks are rarely available in large quantities and protocols are often unclear.

Greater collaboration must be seen between federal and state governments, hospitals, and community organizations in order to prevent the PPE shortage from extending for years to come.

As of Sunday, August 2nd, Dr. Deborah Birx said that our country is in a “new phase” of the coronavirus, and suggested that many Americans consider wearing masks in their own homes. For Americans living in communities seeing a sharp increase in cases, or living with individuals more susceptible to the virus due to age or medical conditions, Dr. Birx advocates for mask-wearing, as asymptomatic transmissions can easily affect entire households.

Dr. Esther Choo, Co-Founder of GetUsPPE, sat down with TED to discuss the ways in which citizens can help fight this virus, as well as the idea of deploying mobile ICU units to help hospitals close to reaching capacity. She further discussed the impact COVID-19 has had on the health of frontline healthcare workers, stating that doctors are being “pushed to the brink.”

After new data emerged predicting a 1,000 per day death rate for the next 30 days in the United States, Dr. Megan Ranney stressed the importance of wearing masks and maintaining social distance over the next few months. Dr. Ranney further emphasized the lack of national strategy in both testing and PPE distribution with PBS News Hour, and called for greater national coordination. She encouraged individuals to do their part in following guidelines such as mask mandates, which must be made more enforceable, as significant steps such as school reopenings depend on our ability to uphold public health measures. 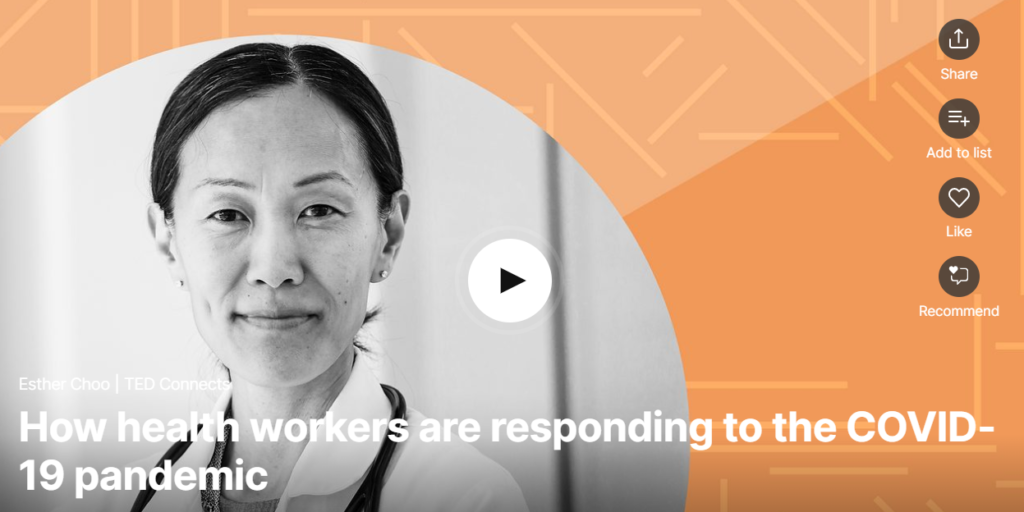