By Unnati GuptaFebruary 16, 2021No Comments

As cases decline in the United States, the supply chain of personal protective equipment (PPE) begins to even out thanks, in part, to the Biden administration’s full deployment of the Defense Production Act. Despite this, healthcare workers continue to reuse N95 masks while shortages of other PPE types, like nitrile gloves, take center stage. With the threat of variants still on the horizon, Get Us PPE continues to push for equitable distribution of PPE and vaccines and continues to encourage Americans to wear masks and social distance. 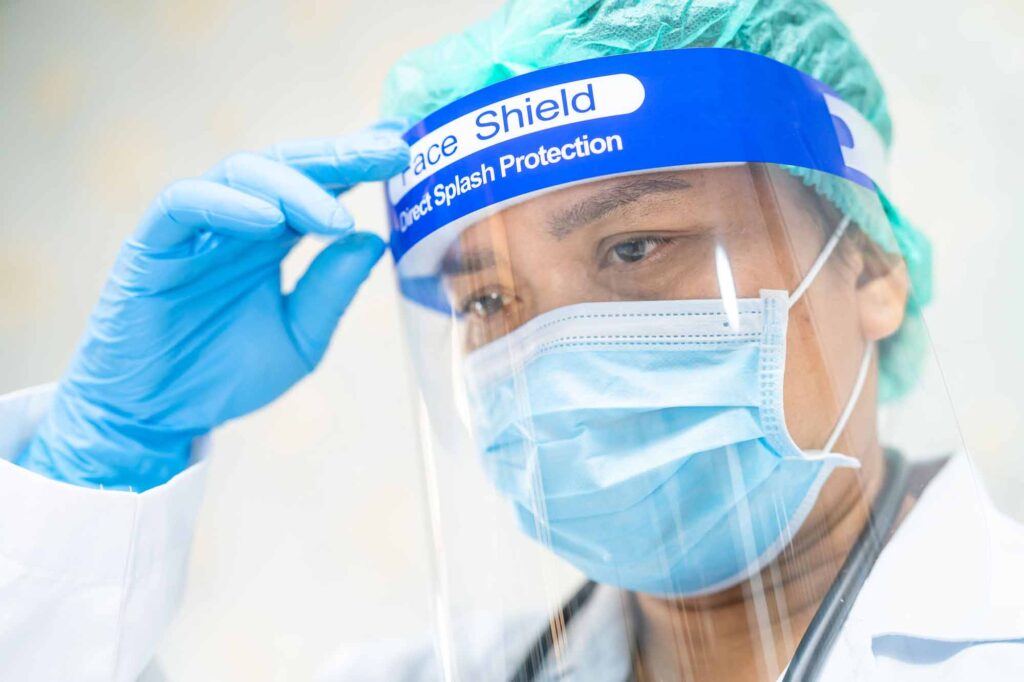 An update on the numbers of cases and deaths from the coronavirus: As of Monday, February 15th, the United States has over 27 million cases and 480,000 deaths from COVID-19. North Dakota, South Dakota, and Rhode Island top the chart for the highest case rates (cases per 100,000 people). However, states like California, Texas, and Florida still maintain the largest number of total cases. As the New York Times reports, the past few days have seen a steady decline in new cases, with new cases falling 21% in the last two weeks. Some experts are even saying this could be the beginning of a consistent decline for months to come.

However, this is not a sign to ease restrictions. New variants of the virus are threatening the progress we have made. The rapid rise of new strains is causing surges in Britain, Ireland, South Africa, and more. Many worry that the same could happen in the United States. The New York Times states, “Public health experts likened the situation to a race between vaccination and the virus’s new variants- and the winner will determine whether the United States is approaching a turning point in its battle against the coronavirus.”

The PPE crisis is easing in some facilities. For example, Indiana University now has a six-month reserve of PPE. The implementation of the Defense Production Act allowed them to acquire a steady supply of respirators, and they have been able to find suppliers to meet their needs. It’s a sign that shortages are not as widespread as they were a year ago. However, many healthcare facilities are still facing challenges. Get Us PPE data shows that requests for PPE increased by 260% from November to December and 48% from December to January. Within facilities that are requesting PPE, the Association for Professionals in Infection Control and Epidemiology found that 73% are forced to reuse their respirators.

While many are forced to reuse respirators, nitrile gloves are taking center stage as one of the items in most demand. Get Us PPE reported on the nitrile glove shortage a few months back, but the problem has persisted. With Top Glove, the largest producer of nitrile gloves, forced to shut down in November due to a COVID-19 outbreak, the supply chain has been slow to recover. An increase in prices, delay in delivery, and shortage in raw materials has made obtaining a steady supply of nitrile gloves extremely difficult.

An increase in prices has underscored the entire PPE crisis. With smaller facilities not able to afford bulk shipments, they are often shut out by suppliers. Prices of gloves, wipes, masks, and more have risen exponentially during parts of this pandemic. Get Us PPE has created the Fairness Distribution algorithm to equitably match PPE donors to recipients who need PPE the most. As reported in Supply Chain Dive, Get Us PPE takes into consideration factors like “facility type, the immediacy of need, medical staff’s risk of exposure, the local healthcare capacity and the vulnerability of those served by the requesting organization.”

Dr. Shikha Gupta, executive director of Get Us PPE, co-authored an article in Business Insider that provided insight into the action Biden’s team has taken and what they can do in the future regarding the PPE crisis.

One of Biden’s most powerful actions while in office has been his executive order implementing the Defense Production Act in its full capacity. Dr. Gupta outlines three main actions President Biden can take moving forward.

While we don’t see healthcare workers wearing garbage bags as gowns or walking into patients’ rooms with cloth masks on the news, it doesn’t mean healthcare workers have stopped facing problems. Dr. Ann Victory described her pandemic experiences to CBS News. While her hospital claimed on the news they were following protocol and could ensure the safety of their employees and patients. Dr. Victory saw a very different reality. “What I saw when I actually went to the medical floors was that we weren’t using the right precautions. The staff wasn’t safe. And therefore, the patients weren’t safe,” explained Dr. Victory. Her staff was required to reuse N-95 masks far beyond their recommended usage. After buying $7000 worth of government-approved PAPRs from her own money for her staff, Dr. Victory was told she couldn’t use them and had the equipment taken from her. Stories like this aren’t uncommon, and many healthcare workers have come forward anonymously with similar stories from fear of being fired. Get Us PPE data shows that 90% of surveyed frontline workers are reusing single-use masks. “The most frustrating thing to me is knowing that my safety is being compromised every day,” stated an anonymous healthcare worker.

This Week at Get Us PPE

Dr. Shikha Gupta, executive director of Get Us PPE, spoke with WGBH to explain the growing inequalities in PPE needs. Dr. Gupta explains, “This is a fundamental piece of inequity that has always existed in the American healthcare system, but there are times that really highlight that inequity. PPE distribution has been one of them. We’ve started to see that — it’s a pervasive issue, but the people who are able to dig themselves out from under the weight of not having protective equipment are the ones who have access to money, to resources, and to everything else you think of a well-functioning healthcare system.”

Get Us PPE was featured in a Q&A with Twin Cities Pioneer Press. When asking why healthcare workers cannot reuse N-95 masks, Get Us PPE was quoted explaining how “In medical settings, a significant percentage of N95s failed a fit test after four or five ‘donnings’ and ‘doffings.’ They no longer fully sealed the face. There’s no universal guidance on best practices for disinfecting and reusing N95s. Some research supports sterilizing N95s with bleach. The use of ozone has also been approved by the FDA for some reusable medical devices. But these tactics need further research to ensure safety.”

Please help us get PPE to communities at risk. A $5 donation can supply an N95 for a healthcare worker.

Need PPE? Complete our form to register your needs anonymously.