An update on the number of cases and deaths from the coronavirus: As of December 6, the United States has a confirmed 14.4 million cases of COVID-19 and 280,000 people have died. The midwest continues to see an unprecedented surge of cases, with North Dakota, South Dakota, and Iowa topping the list for highest case rates (cases per 100,000 people).

A Timeline of the PPE Crisis

While many of us have heard of the personal protective equipment (PPE) crisis on the nightly news, on the morning radio, or on social media, it’s message has always been evolving. What started out as healthcare workers around the country wearing trash bags as gowns have now turned into a more nuanced problem, one that is affecting different workplaces in dramatically different ways. But one thing remains constant, the need never went away. 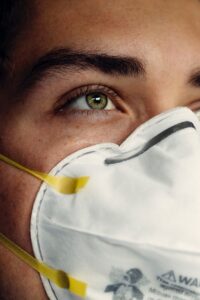 The PPE shortage came to light in March, and many have stories similar to Christine Garcia, a regional director at an agency for children with mental health and behavior issues in San Francisco. When she needed to find masks, she put in a request to the city of San Francisco and received a small amount. The government had provided what it could, but her facility was far short of the amount of PPE they needed. To get the necessary equipment, she had to contact her friend’s brother’s business manufacturer—who happened to be based in China—and request that 500 masks be sent over for her agency. As March neared its end, and stories like Garcia’s became more common, a new wave of grassroots organizations started to fill the gap in resources. Organizations like Get Us PPE were founded to help get PPE to those who needed it the most. Tech businesses, like the one run by Shafqat Islam, converted their workplaces into PPE distribution centers.

As April began, a disparity in PPE access began to emerge. While facilities large and small were struggling at the beginning of this pandemic, large and well-funded facilities like Emory Healthcare in Atlanta found ways to meet their PPE needs. Whether this was through grant money, gracious nonprofits, widespread press outreach, or individual donations, healthcare workers in large hospitals could start to feel some hope again. In contrast, small healthcare facilities and rural communities were getting no help. Beyond the small amounts of PPE local governments were able to provide, non-medical centers, nursing homes, and Native American tribes were left to find PPE by themselves. Susan Alzner, co-founder of shift7, a company working closely with Native American tribes, explained to STAT News that they couldn’t even find reasonably priced PPE on Amazon.

This gap between large and small healthcare facilities only widened as the summer went by. Get Us PPE reported that 66% of PPE requests were coming from non-hospital facilities. By August, that number had jumped to 90%. It seemed as though the PPE shortages were getting resolved as the summer continued, and as many turned to focus on the secondary effects of this pandemic, “the economy, the mental health toll of shelter-in-place orders, the horrifying lingering effects of the virus,” as Irena Hwang, writer at STAT News, explains. However, the decline in media attention and cries for help on social media did not mean this shortage was over. Dr. Ranney, co-founder of Get Us PPE stated that this problem “is absolutely, positively, not fixed.”

Now, as we approach the holidays, travel has increased and so have cases. Organizations like Get Us PPE are still working to fulfill the requests that come in, and people like Shafqat Islam hope this will act as a lesson for hospitals, so no one has to ever again be “in a reactive situation to save lives.”

The Associated Press released results from a recent survey that shows many healthcare facilities are reusing single-use PPE, which equates to “implementing PPE crisis standards of care.” After surveying 1,083 infection preventionists in United States healthcare facilities, 73% reported extending the life of/reusing respirators, 68.7% are doing the same for masks, and 75.8% are reusing or elongating the use of face shields or other forms of eye protection. 73.6% of respondents said that they are reusing their masks five times or until they break and they need a new one. 72% are strongly concerned with “their facility’s surge capacity,” and 84% are more concerned about supply shortages than they were in the previous year. These numbers are yet another indicator that frontline workers around the country are going to work in unsafe conditions every day.

This Week at Get Us PPE

The Scientist highlights Get Us PPE in their 2020 Gift Guide as an organization to donate to during the pandemic. They convey the importance of donating to science this year, as hundreds of organizations and research centers can use donations to make STEM advancements.

The Philadelphia Tribune talks with Dr. Megan Ranney, co-founder of Get Us PPE, about the ways in which healthcare workers are trying to stay safe. While the White House Coronavirus Task Force said the Strategic National Stockpile is expanding, healthcare workers are still struggling. Dr. Ranney explains, “My colleagues across the country are reusing N95s for as long as they can. Many hospitals are still using hand sanitizer that they made in-house instead of buying it from purchasers, etc.” The Philadelphia Tribute also states that nitrile gloves, isolation gowns, N95s, and testing supplies are currently in the highest demand. Oftentimes, state and local governments may have access to this PPE, but poor supply chain management has made it difficult to get supplies to facilities. Dr. Judith Guzman-Cottrill, member of the US CDC advisory committee on infection control, stated, “some weeks the supply is good, then the next week it can be unreliable.”

Dr. Megan Ranney, co-founder of Get Us PPE, spoke with Andy Slavitt on his podcast, In the Bubble with Andy Slavitt. Dr. Ranney recorded her day at the ER. This powerful episode gives us an insight into what being on the frontlines is actually like. Here are some segments of the conversation:

“As soon as you get a bed for someone upstairs, it gets filled with someone else, and they’re all really sick.”

“There was fear and anxiety from the families. A lot of folks I had taken care of had seen their families the day before. That too is very difficult for a physician who is working for our health system that is already on the edge and knowing that we’re looking at a cascade of hundred and hundred of new infections.”

“It is tough to hear…it’s heavy, your head starts to hurt. I wear glasses, the elastic from the two different masks and face shield compresses my glasses—causes sores behind my ears—sores on my face. You can’t drink, you’re sweaty, it is physically exhausting.”

Are you in need of personal protective equipment?

If you are a healthcare worker or frontline worker in need of PPE, submit a confidential request. Get Us PPE will try to match you with donations as soon as possible.