Skip to main content
Close Search
AdvocacyStories From the Frontlines

By Grace Jin, a blog contributor at GetUsPPE.org.

As a public health initiative founded on principles of safety, GetUsPPE stands in solidarity with the thousands of people marching for Black lives across the United States. To help protect the protesters taking to the streets during the COVID-19 pandemic, our network of affiliates have mobilized to distribute over 46,900 masks and other PPE to community-led organizations and Black Lives Matter (BLM) demonstrators, as well as medical-grade supplies to street medics assisting injured protesters.

We asked some of our coalition members about their efforts to distribute PPE, why direct action is important, and what their experience has looked like. Here are some of their responses.

Alizee Weber leads the Specialty Matches team, which helped secure and distribute donations of over 30,000 units.

Ash works across GetUsPPE teams, including in Communications, Match, Makers, and Protect Protesters.

Diné Butler is the local chapter Lead of Last Mile NOLA PPE, a network of volunteers and organizations across the United States getting life-saving PPE directly into the hands of frontline workers during the COVID-19 pandemic.

Gaurav Gupta is the regional lead for GetUsPPE Oregon.

Joe Wardell is our Northeast Regional Coordinator for regional affiliates in the Tri-State Area and New England.

Rowan Rockafellow works on the Specialty Matches team and helps distribute to protesters in D.C.

How did GetUsPPE come to support BLM protesters? Why is this important?

Ash: Within GetUsPPE, my partner advocated for me to be part of discussions that started taking place about race without Black people. I made it clear where we are failing with race internally, and that direct action to support the fight against white supremacy and fascism plaguing our country is the only way to make real change. After giving some primers at an internal town hall a couple weeks ago on the reality of what people are facing, and how serious the risk is for those on the ground, I followed up continuously for a week to make sure no one endangered the protesters’ safety or ignored their needs, agency, and expertise. I’ve learned how to be firmer with people in public and live my truth more loudly.

Keziah: A core part of our mission is to deliver PPE to areas that are most in need, the majority of which are communities with a high population of BIPOC. The inequity in PPE access is not only a supply chain issue, but also exposes the effects of systemic oppression of Black communities in their lack of community resources, access to quality healthcare and lower health outcomes, all of which have made them that much more vulnerable to this pandemic. Protecting our protesters is protecting those who are in the front lines, risking their health and safety to fight against the systemic racism, inequality, and police brutality that has grown like a tumor in our country for far too long.

Diné: LastMile NOLA is founded on the principle of protecting the most vulnerable populations in New Orleans who are the most at risk. In New Orleans, as in the United States, this public health issue greatly highlights the health disparities by race. The latest data shows that over 70% of all COVID-19 deaths in our city are Black. We see the direct intersection between public health, environmental justice, economic justice, and systemic racism and believed we needed to do what we could to increase public safety.

Why did you get involved in the effort?

Alizee: The short answer is that it is the right thing to do. We know that Black Americans are disproportionately affected by COVID-19 and have poorer outcomes. Studies have shown, time and time again, that the quality of medical care they receive is greatly inferior to that of the care other patients receive. I wholeheartedly support the Black Lives Matter movement, because it is a matter of human rights, not opinions. As such, I consider that providing adequate protective equipment to protesters is part of the work we have to do, and part of my duty as someone with the ability to do so.

Joe: Personally, I watched the video of George Floyd’s death and was devastated. I went to college in Baltimore and in 2015 during my sophomore year, Freddie Gray was killed during a “rough ride” in a police van. Back then, I was terrified and too immature to understand the complexity behind the protests in Baltimore. Now, after hearing testimonies from our Black volunteers during a town hall, I felt an overwhelming urge to do everything I can to contribute to efforts to get PPE to protesters. Every small step leads to beautiful change and I want to play my role.

Gaurav: From the beginning of the pandemic in the United States, my work with GetUsPPE was primarily to support healthcare workers with PPE while they cared for patients. Then, as data showed reduced transmission in the community with simple interventions such as wearing masks and social distancing, my focus transitioned to ensuring the general population had access to masks. When another volunteer posted that he had seen several photos of protesters in Portland without any masks, I collaborated with local partners and distributed 550 cloth masks to protesters. It is important to control the spread of the virus as much as possible while standing against racist policy. If all men are truly created equal and we are to uphold the basic tenets of humanity, then, we must stand in solidarity with the BLM protesters, because our African American brothers and sisters have suffered too long.

Keziah: There’s no fancy system, just many dedicated people working tirelessly through tons of slack messages and emails towards a common goal of getting protesters PPE as fast as we could. We tried to establish a clear process and tracking system, but faced several challenges. It was imperative that the information of our requesters was kept safe and secure. We reached out to organizers, but many were understandably overwhelmed and couldn’t get back to us on what they may need. We also did not want to make promises we couldn’t deliver. So we first ensured donors were available, then offered them to protest organizations through the vast network of volunteers from our organization and affiliates. Within a week, we were able to deliver over 40,000 units of PPE to seven states.

Rowan: Once we started supplying protests, it was pretty easy to ask prospective donors whether they’d be willing to supply protest organizations with expedited shipping. The biggest challenge is maintaining anonymity while coordinating the donations. I had to spend quite a while wandering around the DC protests and speaking to various medics before I found anyone who was willing to give me their names and addresses for deliveries. While the reports remain somewhat unclear, there’s pretty troubling evidence that law enforcement agents specifically target field medics at these protests, so we had to be extra careful to ensure that none of the information that we gathered leaked.

Diné: There are sometimes four events per day, so the only way to effectively be everywhere was to go straight to organizers and create new partnerships so that we could reach people at each event. We reach out through social media and emails, and physically approach organizations we saw involved in coordinating. Our goal is for protest organizers to take two minutes to ask people to engage in safe mask-wearing and direct them to where masks are handed out. Thus far, we have distributed 700+ masks to the Medic Station at a BLM protest in Duncan Plaza, a Mutual Aid station at an Orleans Parish Prison Reform Coalition rally, directly distributed to the crowds at the foot of City Hall, and have distributed masks through the members of the Stand Up Sanitation group, Birthmark Doula Collective, New Orleans Hospitality Workers Group, and CORE Response throughout daily protests, actions, strikes, and marches.

What’s struck you about these protests?

Joe: I had the opportunity to go with some of my coworkers to the protests in New Haven, and I was captivated by the power and energy of everyone around me. The speakers at the protest were all in high school and were wearing the PPE that GetUsPPE was able to connect to them, and hearing their pain and their calls for change truly brought me to tears. As a white male, I am representative of systemic racism that has brought our society to a tipping point. Further, as a future physician, I would be failing myself and my patients if I don’t address and tackle these issues head-on.

Gaurav: There is a sense of unity and hope at the protests. I went to a neighbourhood protest in Woodstock, Portland which included many families with young children. It’s great to see kids getting involved. I was very disappointed to hear that some of the cloth masks we had donated to Oregon Health & Science University(OHSU) were confiscated by the police.

Ash: Out in Los Angeles, people are so engaged with local affairs and government, which in addition to the protests has provided some amazing steps forward. LA City Councilmembers have motioned for a new policy to stop sending armed officers for nonviolent calls for emergency services—and that includes wellness checks, where people call 911 to get help for someone who is having a mental crisis, and armed officers with no care or training except for a gun get sent instead of a mental health care professional, which has led to many instances of murder in the second degree or “wrongful shootings.” Things really look like they could get safer. The biggest thing though, is that we are taking care of each other, through COVID-19, white supremacy, and beyond. Mutual aid groups are thriving. People aren’t just thinking about doing the right thing, or learning more about the real history of this country, they’re DOING IT. If Angela Davis can get hopeful, so can I.

The June 16 motion states, “The first step the City of Los Angeles can take to re-imagine public safety is to develop a systematic crisis response plan to directly connect people in need to City, County, or community-based service providers and replace law enforcement presence in non-violent, non-criminal situations with a range of unarmed service providers including medical professionals, mental health workers, homeless outreach workers and other unarmed professionals with specialized training.”

This courageous step, along with Minneapolis City Council members’ pledge to defund its police department, answer sweeping calls for policing change and investment in community-led public safety. “When we fight, we win. And we’re just getting started,” said the People’s Budget LA, an activist coalition led by Black Lives Matter-Los Angeles. 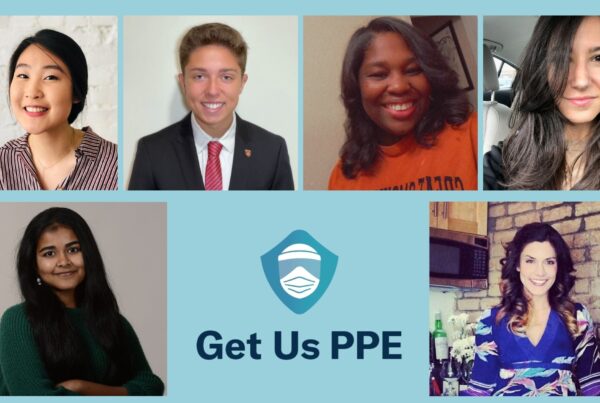 Behind the ScenesStories From the Frontlines
April 29, 2021

Get Us PPE Gives Thanks to Its Team of Communicators, Designers & Fundraisers! 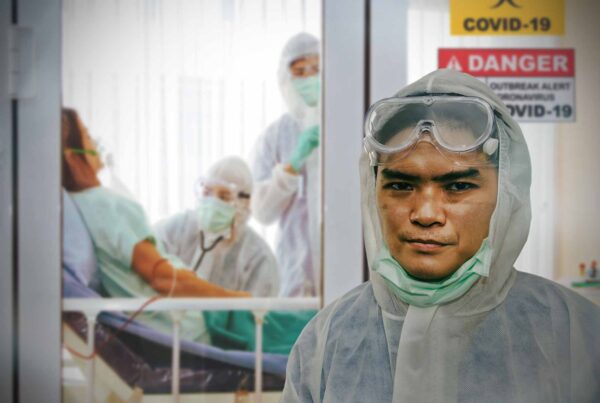 PPE InsightsStories From the Frontlines
January 25, 2021

The PPE Shortage Crisis and Rationing