PPE Weekly Briefing: Cases continue to surge in the midwest, but is there enough PPE in the national stockpile?

An update on the number of cases and deaths from the coronavirus: As of November 29, the United States surpassed 13 million coronavirus cases and 265,000 deaths. The midwest continues to see the highest concentration of cases, with North Dakota, South Dakota, and Iowa at the top of the case rate list (cases per 100,000). As cases surge in the Midwest, the PPE national stockpile is once again under scrutiny. Many healthcare professionals note smaller hospitals and health care centers continue to struggle to access PPE. With Thanksgiving over and the holiday season underway, healthcare experts are concerned the numbers may not be getting any better.

The story remains the same. Larger hospitals get better access to PPE as national stockpiles grow, but small clinics and non-hospital centers continue to struggle. Last week, the White House Coronavirus Task Force held a briefing, stating that the Strategic National Stockpile has enough N95s for a 4-month surge. They further noted that the stockpile is better equipped than it was a few months ago. However, as is often the case, these briefings don’t match the picture at many healthcare facilities. Dr. Ranney, co-founder of Get Us PPE, explained, “My colleagues across the country are reusing N95s for as long as they can. Many hospitals are still using hand sanitizer that they make in-house instead of buying it from purchasers, etc.” The recent Get Us PPE October Shortage Index shows that 69% of facilities requesting PPE had no supply remaining of at least one type of PPE.

Of these facilities in need, most are “mom and pop” clinics, as described by Dr. Sunny Jha, assistant professor of anesthesiology at the University of Southern California. He explains, “We were fortunate in that regard, but I think the folks that really got it the worst were the smaller community hospitals — hospitals that are not necessarily part of a larger integrated health system that had to compete with larger health systems, and their orders [for PPE] — the ones that didn’t necessarily have connections to the large suppliers.” Further, certain parts of the country, like California, stockpiled PPE earlier on. At the same time, many east coast cities and states were slower to get PPE.

However, Dr. Ranney warns that while small facilities face the worst shortages, large hospitals are not in the clear either. While these hospitals have managed to find some PPE, they certainly don’t have large amounts of PPE waiting to be used.

While many facilities cannot find suppliers or enough PPE, the ones that can get in touch with suppliers often face budget restrictions. Nursing homes, among several care facilities, are not able to afford large amounts of PPE. “The cost has skyrocketed,” states the American Health Care Association National Center for Assisted Living, a nonprofit representing care facilities.

Many of us have heard the term “strategic national stockpile” concerning the PPE crisis. But with the mixed messages, constantly changing numbers, and lack of insight into the Strategic National Stockpile (SNS) system, people are often left wondering if it is working. The SNS is a group of warehouses and centers spread across the United States. Each warehouse, the size of multiple Walmart Supercenters, contains emergency equipment meant to help in a health or security emergency, like a pandemic. According to the SNS’s November numbers, the stockpile has 142 million N95s and 99 million masks, gowns, and coveralls. While this seems to be an ample amount of PPE, the Trump administration hoped for 300 million masks by the winter. Dr. Shikha Gupta, Executive Director of Get Us PPE warned, “we need billions more units of PPE to meet the need we’re seeing across the country.” Get Us PPE has received 17,000 requests for PPE. To fulfill all these requests, we would need to give 22 million units of PPE each week. Compared to the numbers in the national stockpile, this number shows the significant shortcomings of the SNS.

While the SNS has gained greater support and funding, more PPE is manufactured overseas, slowing down and complicating the supply chain. For example, nitrile gloves are primarily made in Asia. Because of this, the SNS has only 22 million of the 4.5 billion pairs of gloves it needs. Many people like former SNS director Greg Burel call for an entire restructuring of the PPE supply chain, focusing on creating PPE in the United States. 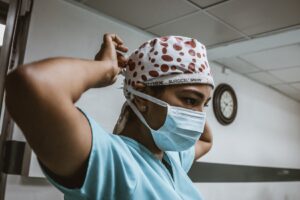 Healthcare workers are feeling the increasing strain of PPE shortages both in small and large healthcare facilities. Rachel Heintz, an ER nurse on the frontlines of this pandemic, gives a poignant remark:

“There are times when you feel like I should be in four different places at once. People’s lives are hanging on, and I can’t even check if their oxygen level is OK or check if their airway is OK. Like, just the basic make sure that they’re still alive.”

As Dr. Shikha Gupta explained, organizations like Get Us PPE cannot fulfill all PPE requests. Unfortunately, more pieces of equipment, like gloves, are starting to become scarce. These trends come as healthcare workers try to manage the emotional toll on top of the physical one. Jessica Scarlett, a travel nurse, explained that this pandemic takes a mental toll that makes it difficult to be on the frontlines for an extended period.

This Week At Get Us PPE

As Giving Tuesday approaches, Get Us PPE is looking to raise $100,000 between December 1 and the end of the year. $1 gets someone a surgical mask, and $500 can help 100 school nurses get N95 masks. Daily Beast listed Get Us PPE as a top healthcare and grassroots organization to donate to get PPE to healthcare workers.

Dr. Shuhan He, co-founder of Get Us PPE, co-authored an article discussing healthcare workers’ new role in this pandemic. He explained that doctors and frontline workers have created a bridge between industries and professionals. Because state governments coordinated much of the pandemic response, healthcare professionals became the center of the crisis coordination, creating organizations like Get Us PPE to address the PPE crisis. To make sure healthcare workers don’t go through something like this again, Dr. He calls for creating “broad coalitions” that can build permanent relationships between industries.

Dr. Shikha Gupta spoke with Spectrum News to explain the disparities in PPE access. She explained that Get Us PPE constantly has to shift its focus as pandemic hotspots and PPE trends change. While Strategic National Stockpile is often meeting state requests for PPE, Dr. Gupta explains that disparities exist in who can afford PPE. She states, “larger academic hospitals that are well-funded and able to be well-stocked, they’re able to make the purchases. They can meet the minimum order quantities that suppliers and manufacturers have, and they’re able to pay inflated prices.” Adding that, “the little guys — particularly the ones who already serve medically-underserved communities, black and brown communities, inner-city, rural populations — they don’t have the funding on their best day.” Dr. Gupta also urges the government not to wait until January 20th to start implementing change. To lessen PPE shortages, President-elect Joe Biden plans to use the Defense Production Act to its full capacity. That said, the government can do things right now to make things easier for all Americans.

Finally, Teen Vogue featured Karina Popovich, a member of the maker team at Get Us PPE, for her initiative to create Makers. This organization creates and distributes PPE, and now works with Get Us PPE to provide PPE to those who need it the most. What started as a Slack group for 3-D printer owners, turned into an organization that has donated over 82,000 PPE units.

Help us get PPE to those who need it most.